Note: If  you have ideas for how to play TSW during social distancing, we'd love to hear them. I could imagine playing it online with everyone in the dark, save their flashlight, and everyone only being able to text-chat with 2 other stars (and the facilitator). That seems like it would work well.

The Stars Whisper is a live action role-playing game (LARP) where participants play the stars in a constellation, shining for millennia in the night sky. Participants will discuss and contemplate philosophical questions, such as the nature of truth, the meaning of existence, or the definition of love with each other, as they light up the void of space.

The game is for 8-12 people and a facilitator. It requires a room where you can turn off or dim the lights, flashlights, and the ability to print character sheets for players. It takes about 90 minutes to 2 hours to complete. The booklet features all the information needed to play, including safety techniques, rules for the players, rules for the facilitator, and character sheets.

The game is designed to be quiet, subtle, still, and meditative, and may summon up feelings of joy, melancholy, connectedness, loneliness, and introspectiveness in players. It is for people interested in pondering philosophical questions, having a contemplative experience, exploring connections with others in a unique way, or who just think that being a star for an hour sounds kind of fun.

In order to download this LARP you must purchase it at or above the minimum price of $3 USD. You will get access to the following files:

If you have ideas for how to play TSW during social distancing, we’d love to hear them

I don’t have money for the game rn, so i’m just guessing, but

you might be able go to specific coordinates & take location-tagged selfies or use a group chat app in those places to play.

Your selfies’ coordinates should be spaced so that when you poke a hole through each of the stars in a picture of your constellation and then take that holey picture and place it over a map, each one of the holes you made should be filled by one of your locations on that map of whatever place

you have in common*.

The Stars Whisper is an intensely existential LARP where you play as stars in a constellation, separated by extreme distance and talking intermittently to ward off the loneliness of a time that is both extremely long and ultimately finite.

The PDF is 11 pages, with a little bit of interior art and a nice, consistent aesthetic. The layout is easy to read, but it does feel a bit like giant blocks of text on first impression.

As the game plays, the individual stars die out, creating communication gaps in the constellation and further forcing the survivors into tenuous isolation.

Players are limited from speaking above a whisper, but they can flash lights and do other things to signal that they are still alive---at least until they aren't.

Due to the themes and intensity, the game's safety tools are a bit of a relief, and there's a debrief included as well, but you're probably going to want a group of people who *really* like heavy games in order to tackle this.

Overall, I think Stars is a really well made experience, and if you want a game that will make you feel emotions and/or existential anguish, this absolutely does that. If that does not sound like something you want to experience, Stars is probably not for you---but if it does, you should check it out. 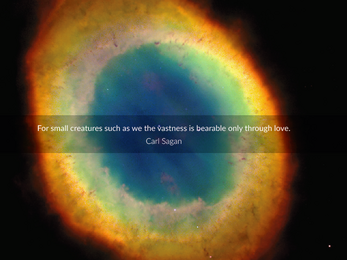 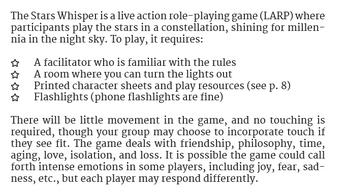